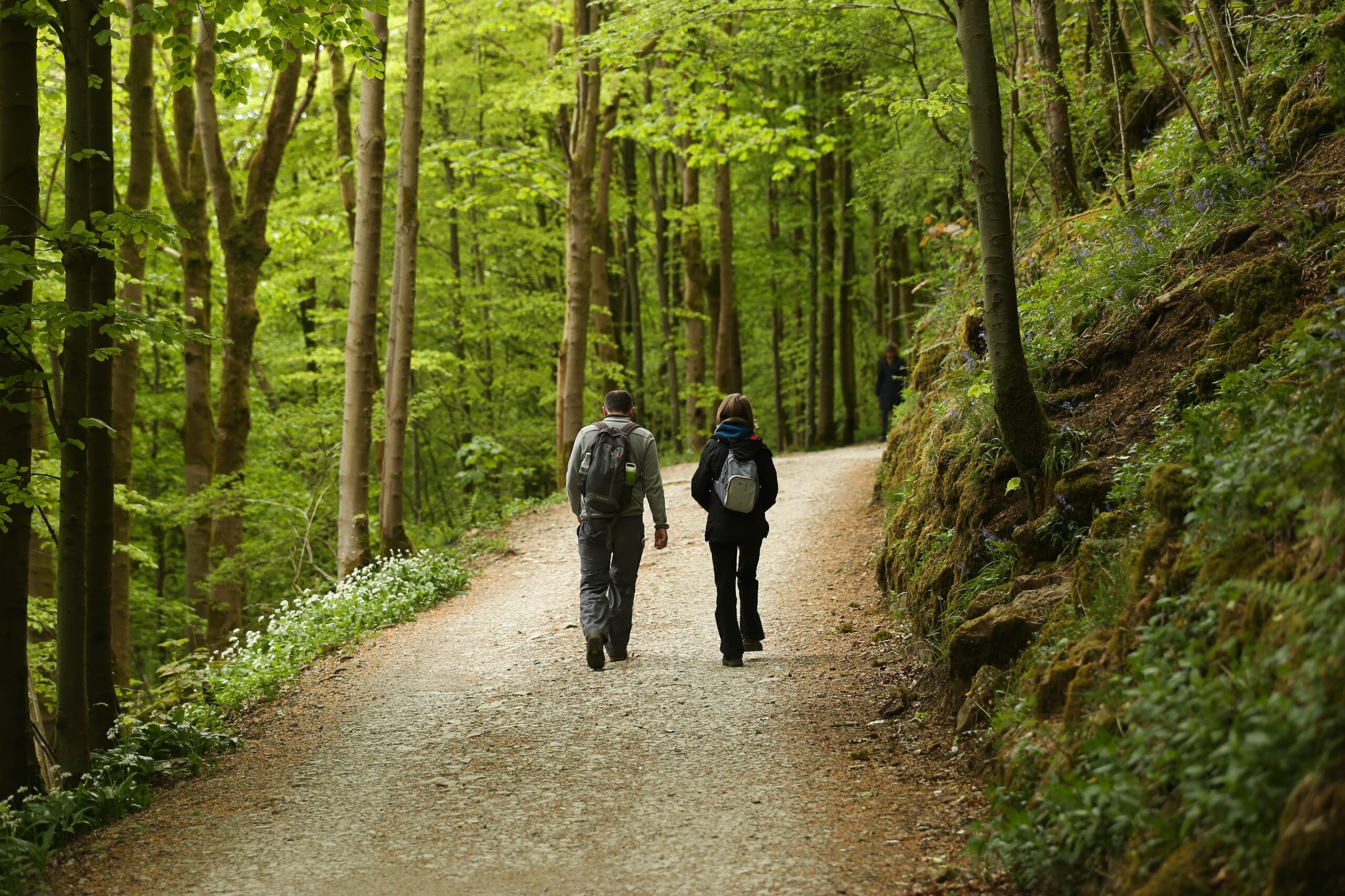 The Ingleborough Estate Nature Trail changes from season to season. The geology of the area supports a rich diversity of habitats for wildlife and plants, both large and small. Here are 10 things to spot on your walk:

Reginald Farrer, a renown and adventurous plant collector, was brought up at Ingleborough Hall. The Ingleborough Estate Nature Trail helped to shape his early passion for mountains and the plants that grew around them. He brought many exotic plants back from his travels to the trail. In one famous incident, he re-packed shotgun cartridges with the exotic seeds he had brought back from his travels and after rowing up the lake in a small boat, proceeded to fire the cartridges towards the cliffs in the hope that some seeds would find a fertile resting place. Keep a look out for the Rhododendrons that Reginald brought back from his travels and planted here at the trail.

Native bluebells carpet the woodland floor in early spring and are soon joined by swathes of wild garlic, sometimes known as ‘Stinking Jenny’.

Mallards are part of a group of birds such as coots, heron and cormorants that are found in or very near water in aquatic or wetland habitats such as marshes, ponds, lakes, bays, and streams. Mallards breed in all parts of the UK in summer and winter, wherever there are suitable wetland habitats, so look out for them in pairs. The males are very colourful and the females have brown plumage.

Known as, ‘The Grotto’, this ornamental stone structure is an example of a folly and was commissioned by the Farrer family in the late 19th century. It was fashionable for landowners at this time to create these ornamental building in gardens and parks. It’s a handy place to sit if you get caught out by the weather!

They say money doesn’t grow on trees but take a close look at the yew trees a little further up the track on your right and you may beg to differ. Hundreds of coins have been pressed into the trunk and branches; a contribution from those who believed they would be granted a wish or good health in return. Touch a coin to make a wish, but as the Money Tree is a little fragile these days, we kindly ask you not to add any more coins to it.

Look out for moss covering the trees and stones. Watch as it changes with the weather, shrivelling and turning brown in the dry and then reviving with moisture and rain to form a soft cushion of green. Mosses exist the world over from deserts to streams, from the Arctic to the Antarctic. They are incredibly resilient and versatile. Mosses will grow in deep, dense forests and caves, in light intensities too low for any other plants to survive.

Pheasants are large, long-tailed gamebirds. The males have rich chestnut, golden-brown and black markings on their bodies and tails, with a dark green head and red face wattling. Females are mottled with paler brown and black. They can usually be seen in the open countryside near woodland edges, copses and hedgerows.

Look up if you hear a ‘kee-yah’ cry, it’s a buzzard circling on the wind currents overhead. Now the commonest and most widespread UK bird of prey. The buzzard is quite large with broad, rounded wings, and a short neck and tail. When gliding and soaring it will often hold its wings in a shallow ‘V’ and the tail is fanned.

Look for birds soaring over wooded hillsides in fine weather or perched on fence posts and pylons. In some areas they are known as the tourists’ eagle, often being mistaken for this larger bird of prey.

If you’re incredibly lucky, you might see some red squirrels! Although sightings are very rare. Red squirrels are our native species and have lived in the UK for around 10,000 years, but they need protecting. Unfortunately, without conservation management, red squirrels could become extinct in England in approximately 10 years. Time is really running out to save our red squirrels.

Bins are provided though out the trail.

Please, respect the trail and the environment surrounding it, and use them.

Guide to Glamping Near Ingleborough

Our Limestone Land; A Unique Tour with Ingleborough Cave

Keep in touch with our latest news, upcoming events and exclusive offers.